Gold defends itself after sharp drop as slowdown fears persist

TALK OF THE TOWN: Lewis Hamilton races into pop as the F1 champion hires Justin Bieber’s voice coach in a bid to conquer the music world

By Alistair Foster, Joanna Bell And Sophie Cockerham For The Mail On Sunday

We’re used to seeing him screaming around the world’s grand prix circuits, but now Lewis Hamilton is planning a major gear change.

The F1 champion has hired Justin Bieber’s voice coach Jan Smith in a bid to conquer the music world. ‘I have no doubt his new music will resonate with the masses,’ said the 62-year-old coach, known as Mama Jan, who said she had even flown to Monaco to work on his voice between F1 training.

Lewis started playing guitar at 13 and set his sights on a music career while he was managed by Simon Fuller, the svengali behind the Spice Girls, from 2010 to 2014. 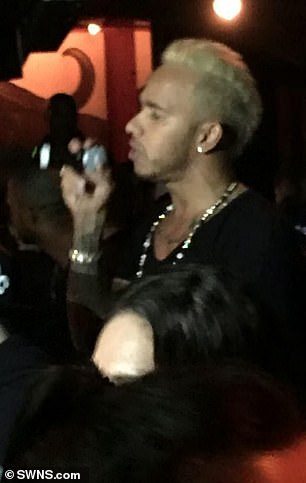 Lewis Hamilton pictured left, during qualifying for the F1 Grand Prix of Great Britain at Silverstone yesterday in Northampton and right, on the mic

Form an orderly queue if you’re skint, gents – Joan Collins despises affluent men and reckons they are all ugly. ‘I hate rich men because they use women as an accessory, as a doll,’ Joan, 87, moans.

A word of advice to her current hubby, film producer Percy Gibson, 55: stay poor and pretty!

Ashley Roberts spikes temperatures as she shows off her amazing figure in a scorching bikini while on vacation in TurkeyBy...