BOC Aviation is testing bond markets in the midst of a travel disruption. – The Washington Newsday

Huawei is set to unveil the Mate 40 series, which could be the company’s latest flagship. A few days ago, Huawei Consumer Line Chairman He Gang released a poster showing what the rear of the Mate 40 series will look like. The image clearly shows two features of this smartphone. It shows the red power button as well as the physical volume rockers. The poster also reveals the rear polygonal design. However, the image didn’t fully reveal how many polygons it will have. At the time, there was speculation that it will use an octagonal (8-sided polygon) design. Well, 8 sides means there will be a lot of sensors on the back – maybe too many.

However, we haven’t seen the latest polygonal design. According to a recent image from a popular Twitter broadcaster, Teme, we might as well have a hexagonal design (6-sided polygon). This makes more sense as the rear won’t feel too crowded. In the image, the six sensors appear to be hexagonal in shape. Maybe we’ll have five camera sensors and an LED flash. Also, under the flash we have what looks like a fingerprint sensor. However, the Mate 40 series is very unlikely to use a rear fingerprint sensor. There are reports that this design is for the Porsche Huawei Mate 40 RS edition. 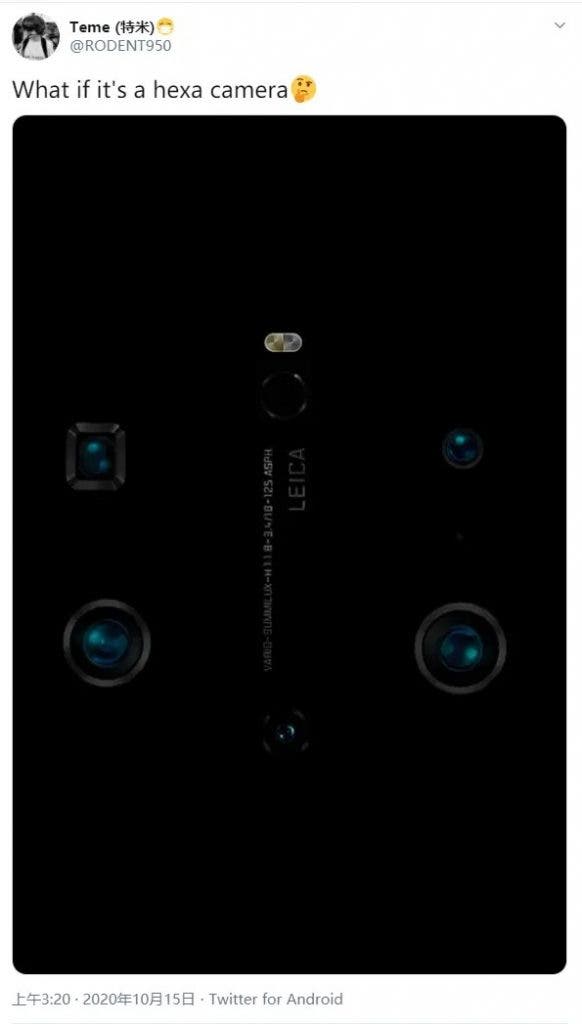 Generally, the Mate 40 series will provide a significant upgrade over its predecessor. It comes with powerful internals and the camera is massive too.

Huawei Mate 40 global press conference to be held, according to official reports October 22. However, this device will not be alone. Here are other devices that are coming with the Mate 40 series